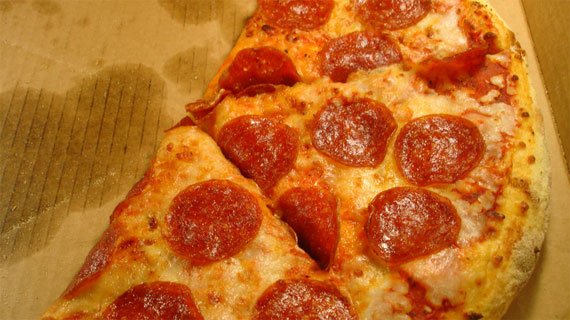 WITH ALL THOSE EXCESS FAT CALORIES SITTING AROUND IN THE BLOOD, WHAT YOU HAVE IS A RECIPE FOR FAT GAIN.

Dreaming of Domino’s? If so, you aren’t alone. Pizza ranks as one of the most craved foods by dieters and those focused on muscle building alike.

But, if you are going to have a cheat meal and indulge in a slice or two, make sure to do it earlier in the day than 9 p.m. or after.

Pizza contains far too many calories to have this close to bedtime; what’s worse, you’ll get an extra does of both carbohydrates and a large amount of saturated fat which will just sit in your stomach as you lie awake in bed at night.

With insulin levels high from the carbohydrates that you’ve just consumed, and all those excess fat calories sitting around in the blood, what you have is a recipe for fat gain.

WHAT TO HAVE INSTEAD:

Down a few hard-boiled eggs instead. You’ll feed your body muscle-building protein without a ton of excess empty calories to go along with them.